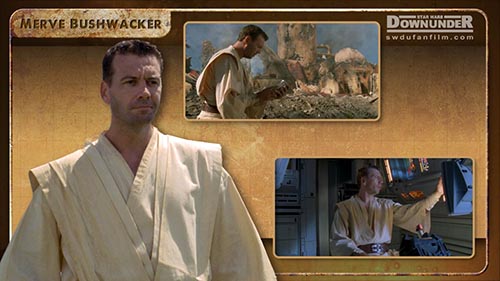 Originally from Oradongia, Merve joined the Jedi order at a young age. During his long years of training he never lost his taste for his native drop: Amber Fluid. On his adventures through the galaxy Merve has yet to encounter a beverage that is the equal of his beloved amber fluid. 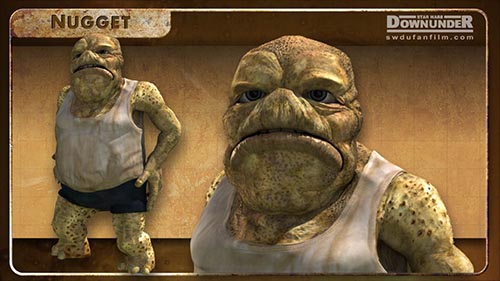 No-one knows how old Nugget is, not even his wife Bev. Originally a livestock farmer, Nugget was forced to diversify with 10 straight years of drought. In recent years Nugget has specialized in making a fine selection of home Brew amber fluids, using water collected from a vast array of moisture vaporators spread around his farm. With Darth Drongo’s rise to power, Nugget has been forced to cease all amber fluid production 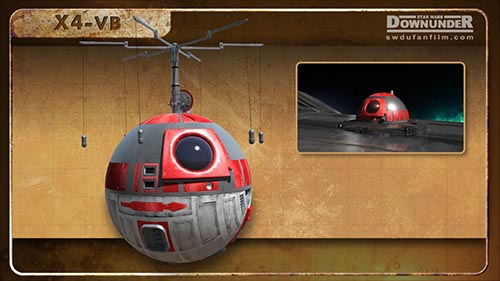 Merves trusty astromech companion X4-VB, has accompanied Merve on most of his hair raising adventures. X4 is a heavily modified astromech. Dispensing with his body all together has enabled him to traverse any terrain they encounter. This constant hovering, requires more power reserves than an ordinary droid. Luckily X4 is equipped with a micro fusion reactor which provides more than enough grunt to get him from point A to point B. Other modifications include an insect repeller that deploys from his head. For more serious threats than a recalcitrant fly, X4 has hidden dual laser cannons, that can pack a serious punch. 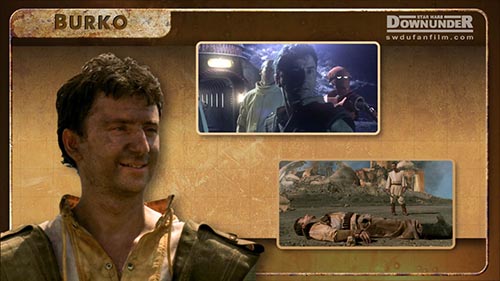 Burko, a native from Oradongia, is a simple man with simple mantra. Have a good time, all the time. By day he works as a prospector, during which time he eagerly awaits catching up with his mates, Bluey, Rado and Murray down at the local pub. 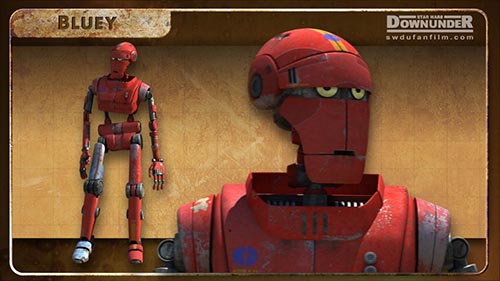 Bluey’s original designation was as a protocol droid. However due to being fluent in only 2 languages, he often found trouble getting work. Now a miner with some special modifications to aid in mineral exploration he spends most of his day dreaming of Amber Fluid. 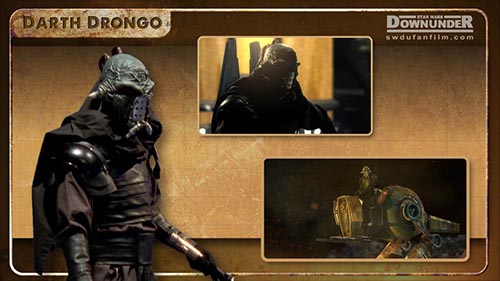 The origin of Darth Drongo remains a mystery to all. His obsession with controlling the flow of amber fluid across the land, has seen him attain an iron fisted grip over all on Oradongia. No one is sure what he does with his massive stores of amber fluid. Some theorize that his alien metabolism requires constant transfusions of the now scarce beverage to keep him alive. Others believe he is simply a wowzer who doesn’t believe anyone should be partaking in the golden beverage. While there are those that claim  he ships it off world to help pay off his gambling debts. Drongo keeps his vast stores of amber fluid in his fortress : Dunny’s Deep on the edge of Oradongia’s only water body, the Oradongle sea. 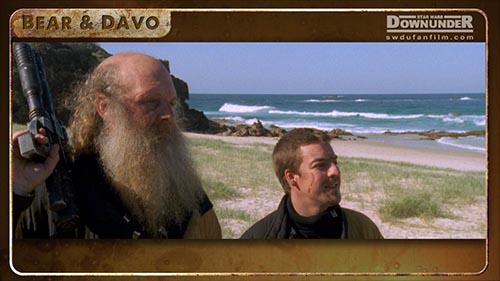 Leader of the freedom fighters, General Bear uses his experience fighting wars offworld, to rally an army together to take on the might of Drongo and his henchmen. Bear is actually his nickname which derives from a thrilling tale from his past. As legend has it, 30 years ago the general single handedly fought an entire sleuth of drop bears deep in the black stump wastelands in an attempt to rescue a young family. General Bear was only able to save the youngest boy “Davo” from the attack. With no family, Bear took on the boy under his wing. Years later Davo stands side by side General Bear in the struggle against tyranny, as his right hand man. 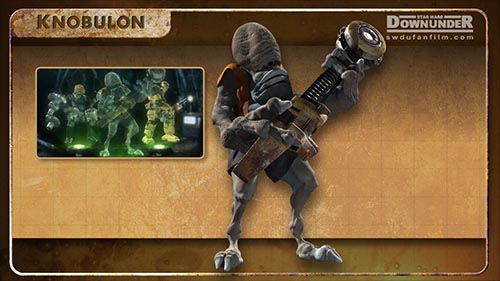 Leader and founding member of Knobulon and the Spheroids, this talented musician is a favourite of the rebel forces. In recent years Knobulon has suffered with “Second Album Syndrome”. After the raging success of his first release “Soggy Surprise” Knobulon has struggled to emulate the catchy melodies and toe tapping rhythms of his first hit. Cancelling all scheduled tours until further notice, the Rebel Forces must make do with pre-recorded holographic performances of Knobulon and the Spheroids.

Real name Ice Peters. Ice is the fearless leader of Brown Squadron. As handy with a blowtorch as he is with a beer can, Ice is a vital asset, both in the air, and on the ground. But when it’s time to cool off at the end of a mission, nothing makes Brown Leader happier than to forget all rank and kick back with Brown Squadron or what he really considers them… his mates. 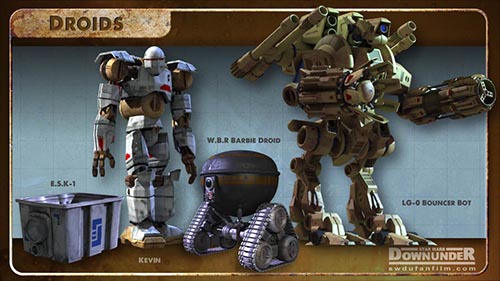 The ESK-1 or Esky Droid provides mobile refreshment for any large gathering or insurgent planning meeting.

Whatever social setting the ubiquitous ESK-1 can be found at, the WB-R Barbie Droid usually isn’t too far behind. This semi-sentient mobile catering station is always ready to “chuck another one on”, when party goers become peckish.

The LG-0 Bouncer Bot, is a state of the art security droid that services nightspots across Oradongia. With greatly increased ability to differentiate between inebriated pub patrons and hostile intruders than older models, the LG-0 has reduced club owners legal fees 10 fold.

Kevin, or Kev to his mates, is a retired pie maker who is currently writing his first novel based on his life story. “Confessions of a Pie Maker” 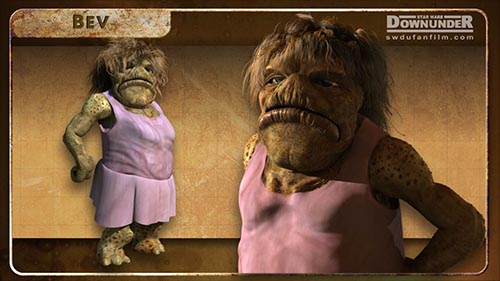 Once known as ” The Jewel of Dong” thanks to her fabled beauty , it’s easy to see why Nugget still sees Bev as a dead set spunk. With keen interests in home-brewing and poddy dodging, Bev and Nugget are a perfect match for each other. 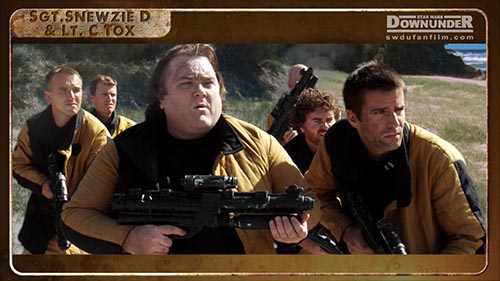 A tactical genius in ground operations, Snewzy D is no mug when it comes to planning an infiltration mission. When this razor sharp mind is working at 110 percent Snewzy realises the importance of a power nap  to recharge and rejuvenate the all important synapses. His best friend Sergeant Colin Tox, a native of the area surrounding Dunny’s Deep, can usually be found at Snewzy’s side. Colin and Snewzy D make a formidable duo in “Team Space Twister” a rebel favorite during the long winter months.  But it’s on the battlefield where the pair really shine. Without Snewzy’s tactical prowess and Colin’s ability to wake him up at critical junctures, the bum nuts may really start to hit the fan!