Most of the various structures featured in Star Wars Downunder were constructed digitally due to impracticality and budget limitations in building large scale sets. There was one exception however. The Ruined pub was actually constructed as a relatively large miniature. The reason this approach was chosen, was the immense amount of detail required to produce rubble,twisted iron and other debris. To reproduce this in 3d within a computer would require massive amounts of polygons that would number in the Multi millions. A number too high for the computer systems that were being used. Using the cg model of the pub used in the opening scene as reference, the miniature was built primarily out of tinted plaster as a finished building. Embedded within the plaster was a fine plastic mesh that would double for exposed girders. Once this stage was finished, the fun part started. The outer shell was unceremoniously taken to with a hammer, breaking the dome down into small pieces. As it came apart the plastic mesh was revealed creating the feeling of exposed metal girders. Corrugated cardboard was used to stand in for miniature corrugated iron. With the basic structure finished, it was painted, then covered with leftover bits of plaster rubble. 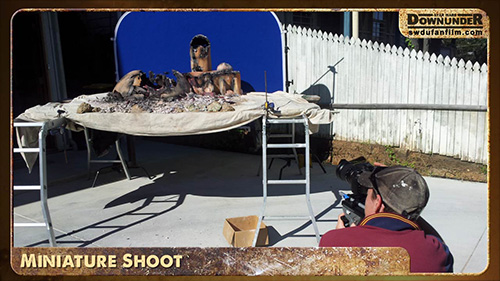 Using reference shots from the original filming, the miniature was photographed from multiple angles with multiple lighting setups, ready for composting. During the compositing process, some minor digital details were added from the CG model in order to better match the pre-blown up version.