Being primarily a Star Wars Fan Film, several design elements take their cue from Star Wars itself. Merve’s Jedi costume and X4-vbs astromech stylings being the most obvious. However, most of the other design work in the film focuses more on the central idea of a Star Wars “Australiana” mashup. Michael Cox and Pete Mullins worked on various designs in an attempt to blend these two normally disparate concepts into a seamless whole. 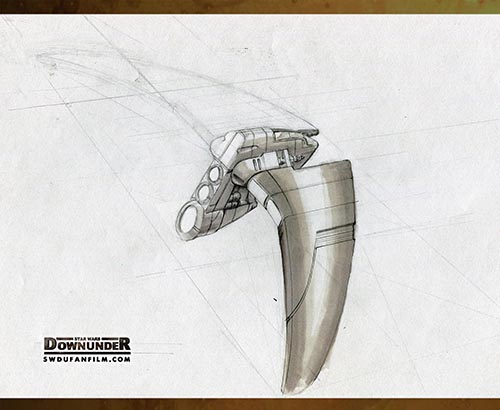 The first thing our hero required was a spaceship. So the first design challenge was Merve’s Ship. This design is influenced by the basic shape of the boomerang and is creatively named, a Boomership. With it’s chromed finish, the design also echoes that of various Naboo Royal Starships from the prequel trilogy. 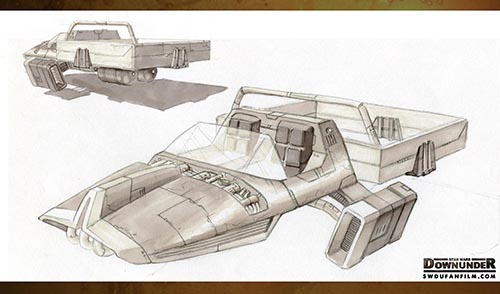 Merve’s appropriated ute speeder takes the notion of a classic landspeeder and blends It with another Australian icon: The ute.  Eagle eyed Aussie film buffs may recognize the colour scheme of the speeder as that from the police cars from the original Mad Max. Even more eagle eyed viewers may spot the two fuel tanks under the back tray inspired by similar additions to the back of Max’s v8 interceptor from Mad Max 2.

This design by Pete Mullins is a fanciful, but fearsome interpretation of that mythical Australian creature of the outback: the bunyip. It is hilariously named by dropping the “b” from the beginning of the word (extreme Star Wars nerds/enthusiasts may recall how the Ronto was named for the Star Wars special edition)

The rebel speeder design here is quite far removed from what would appear in the film. This design takes the term “Boxey” to the next level. The final design would have a much more aggressive look, with it’s heavily armed from foils. This earlier design looks like it would be more at home riding thermal currents on a pleasant afternoon joyride than preparing for an all out battle. 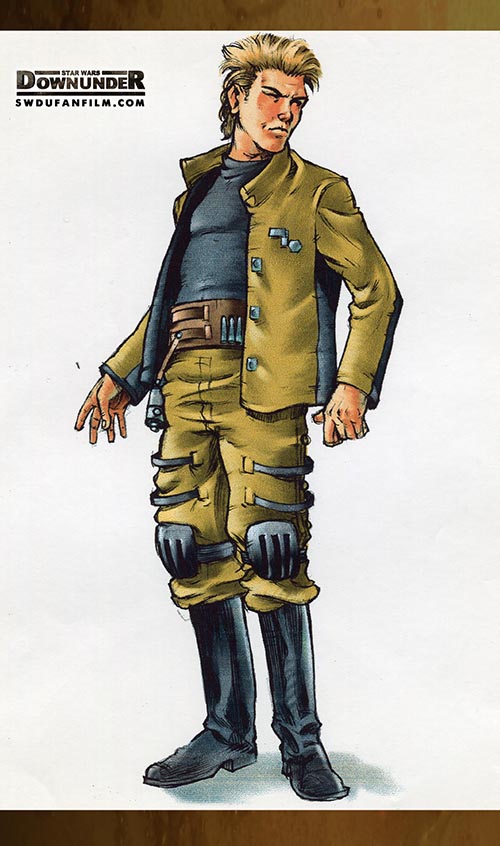 This design by Pete Mullins was based on the medieval era Akerton: A padded and quilted, long sleeved shirt worn under Armour that normally reaches from hips to mid thigh. The colouring is intended to act as camouflage for beach operations.

Nugget himself is inspired by two Australian sources. 1.The titular character from the much loved australian children’s book “The Magic Pudding and 2. The much less loved, introduced pest: Bufo marinus. AKA the dreaded Cane Toad.

This earlier design portrays Nugget to be perhaps a bit more gruff than he was intended to be. 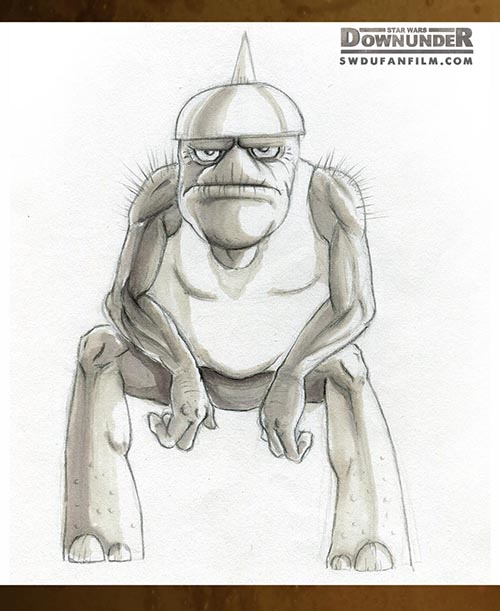 This slightly kinder interpretation of Nugget is closer to what would end up on film. Note the much longer legs in this design compared to the final version.

Nugget’s design was further refined through a series of Maquettes sculpted in Plasticine. The final design was then cast in plaster. Several latex copies were made from this mold and later taken on location and used for lighting reference. Ultimately one of these copies was photographed from multiple angles and used as a basis for the digital model of Nugget. 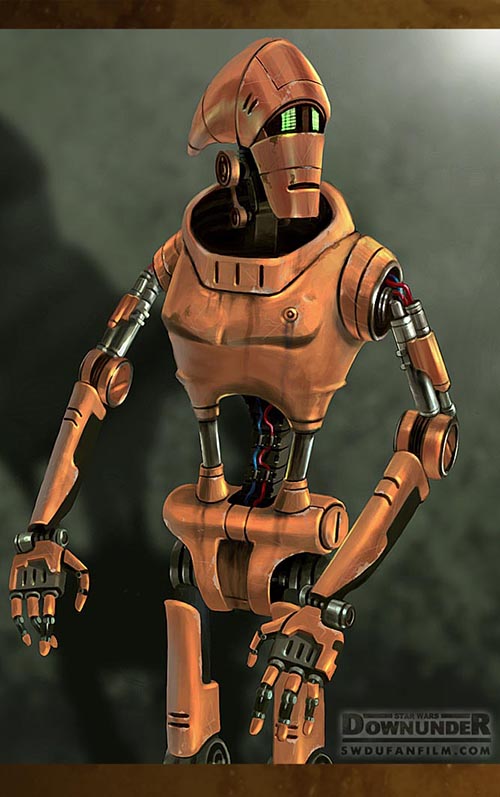 Bluey’s design brief was essentially, a rusted out red droid who’s spent a bit too much time out in the sun. This design by Pete Mullins reflects this idea while honouring the classic Star Wars droid look. 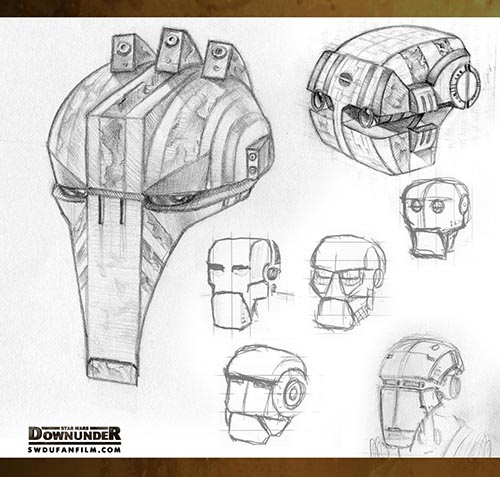 Blueys head went through many iterations before deciding on the final look. 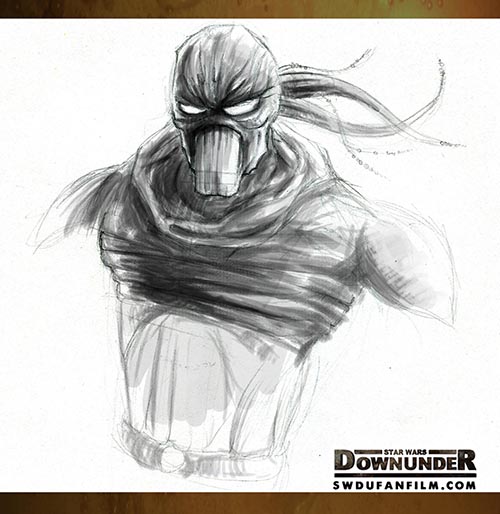 Drongo’s design was originally inspired by the character of Spawn, for no other reason than to look cool. 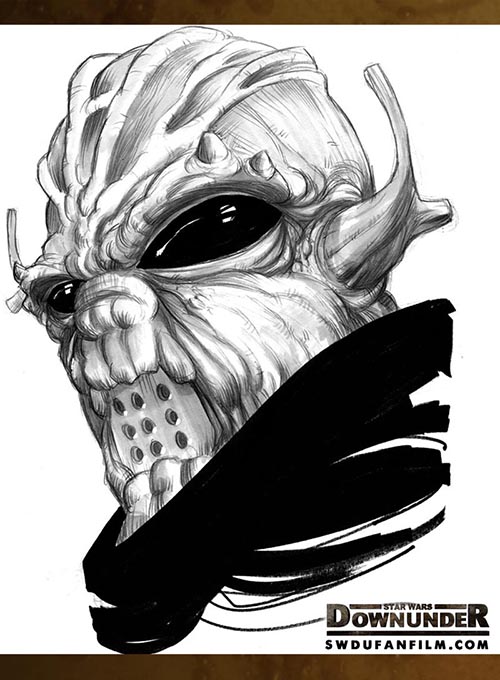 Pete Mullins redeveloped the design to make it more original than a simple knock off of Spawn. 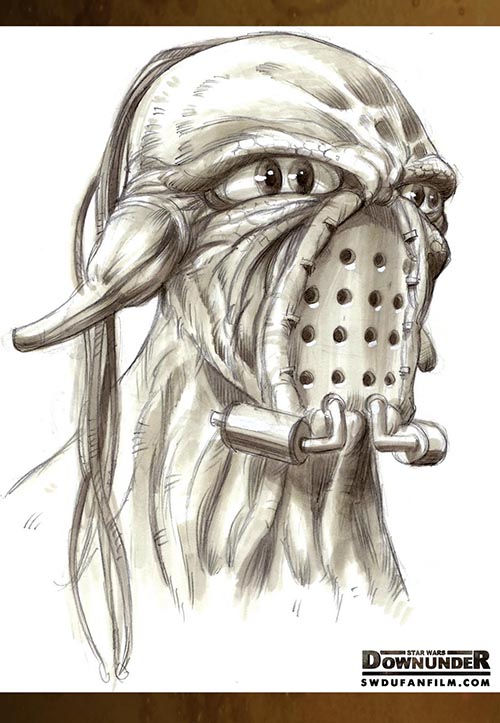 Although striking, the two pupils per eye never made it past the concept phase as it was later decided that Drongo would have no eye detail at all. The addition of various breathing aids echo that of other famous Sith Lords. 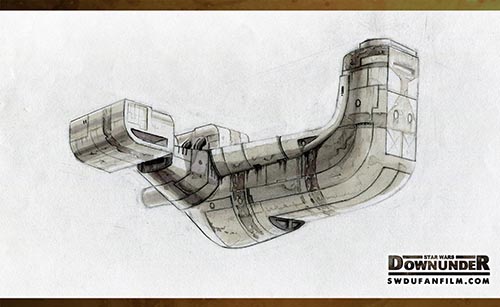 This design differs quite radically from what would end up in the finnished film. It was decided that the curved nature of this design would be too time consuming to model in 3d, considering the amount of screen time the ship would have. 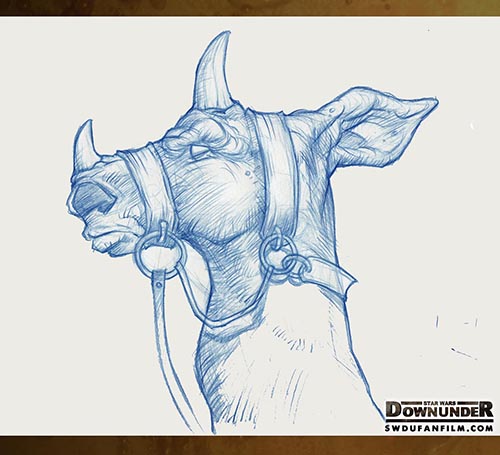 Originally Drongo’s steed was to be essentially a giant Kangaroo with a horn on it’s head. Drongo was even filmed on a saddle to accommodate the addition of this beast. However as post production continued at a snails pace, sculpting another organic creature seemed like a bridge too far, so a simpler robotic design was introduced. 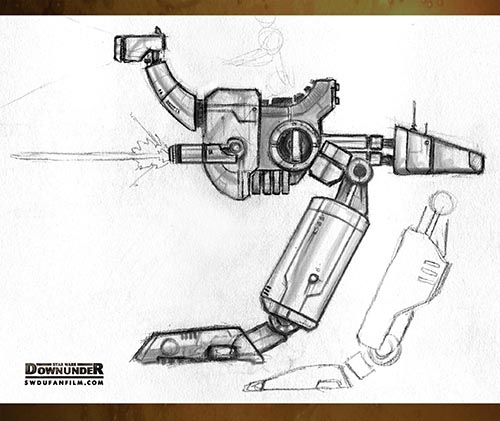 The new design was a blend of the AT-ST from Star Wars, and Australia’s most iconic animal. Dubbed the Roo-Bot, Drongo’s preferred mode of transport officially titled the AT-RB. (The all terrain roo-bot). It utilizes a powerful set of hind legs to literally hop great distances, providing its pilot with a nonsensical blend of high and low altitude within the space of seconds. 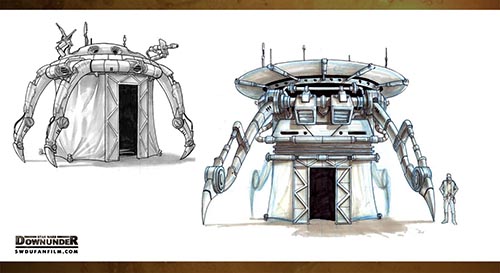 Although never revealed in the film itself, the idea behind the rebel tent was that it could be deployed into an area with great speed. The top section would hover into place, extend it’s landing claws and the tent section would lower to the ground from the top saucer section. Inversely a rebel camp under attack can be clear of the scene in moments. If only camping were that easy in real life. Pete Mullins offered up two designs for this set.